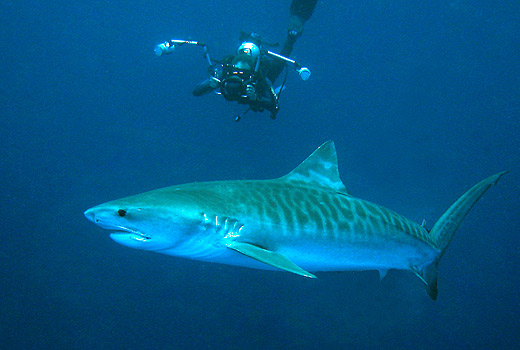 Identification: Another unmistakable submarine presence, tiger sharks are thought attain 7m in length, however sightings in South Africa are almost invariably of female sharks under 4.5m. The robust body bears dark vertical bars along the back and sides to the tail. This beautiful patination, perfectly mimics the refraction of sunlight on a object through water, providing camouflage when seen from above. These markings become less obvious in larger, older sharks. The snout is blunt and square. The caudal fin (tail) is distinctively elongated on the upper lobe – more suited to slow cruising and short, sudden bursts of speed. The first dorsal is prominent and linked to the much smaller second dorsal by an inter-dorsal ridge that also extends forward to the back of the head. Broad, serrated, cockscomb teeth are widely set in both upper and lower jaws.

Biology: Tiger sharks attain sexual maturity at around 3m and give birth to between 10 and 80 live young, measuring 50 to 90cm. They are relatively slow moving and like the ragged tooth shark are able to remain motionless for long periods by regulating water flow over the gills by means of active respiration.

Behavior: Widespread throughout temperate and tropical seas, tiger sharks are known to enter shallow coastal waters in the vicinity of large river mouths and harbors. A voracious and opportunistic predator, they will feed on bony fish, smaller sharks, marine mammals and even birds. Tin cans, plastic bags and livestock have also been found in their stomachs – implying a tendency to scavenge. Recent research indicates that tiger sharks range extensively, covering large areas daily, often using a bouncing swim pattern of rapid ascents and descents through the water column to detect both benthic and pelagic activity and oils from floating or submerged carcasses. In July 2007 we witnessed approximately 15 individual tiger sharks feeding on the carcass of a dead whale – see full report on facebook. Periodically seen in the more tropical waters off South Africa, tiger sharks rarely investigate divers, tending rather to cruise past or shy away. They do however, respond well to baiting and can be encouraged to stay around divers in a baited environment. More on baited shark dives…

Sardine Run Tours and Charters 2022. Bookings for your 2022 sardine run tour are now open. If you’d like to join us on a sardine run […]
Do you like it?
Read more