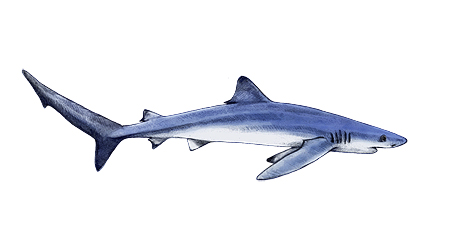 BLUE SHARK – Prionace glauca.
Blue shark identification: The blue shark is a slender, elongate shark that may attain a length of 3.8 m. The body of the blue shark is counter-shaded, deep almost iridescent blue on the back with lighter sides and a white underbelly. The dorsal fin is relatively low and well behind the trailing edge of the pectoral fins, which are very long and slender. Blue sharks have a long and cone shaped snout and the eyes are large with a prominent white ring around the edge.
Blue shark biology: Blue sharks are viviparous, giving birth to anything between 4 and 135 pups per litter. Female blue sharks mature at 5- 6 years and males at 4 to 5 years.

Diving with blue sharks: Blue sharks can be found offshore in almost all regions of South Africa. More on baited shark dives…