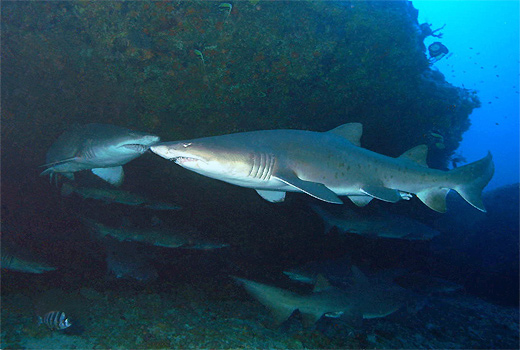 Identification: Ragged toothed sharks are perhaps South Africa’s best loved sharks. Affectionately known as “raggies” to the locals, they may attain 3.2m and 300 kg. Ragged toothed sharks have a plump, dark-brown to olive-grey body and a pale underbelly – the numerous dark spots fading with age. The fins of the ragged toothed are thick and rounded. The first dorsal fin is well behind the pectorals and is only slightly larger than the second dorsal. The lower caudal lobe is undeveloped – ragged toothed sharks being relatively slow swimmers. The forehead slopes dramatically down to a pointed snout and mouth which bears the many long and pointed awl-shaped teeth – better for gripping than for cutting – that form the characteristic, ragged-tooth, overbite.

Biology: Female ragged toothed sharks produce as many as 20 000 eggs which are retained in the uterus. As with all sharks, the males are easily distinguished by the large ventral claspers used to fertilise females. Seasonal scars on females indicate that mating may be a violent affair. During the gestation period of nine months, the first embryos to develop inside the uterus consume their own egg parcels. They then proceed to consume the remaining embryos and any unfertilised eggs until only two live juveniles emerge as live young – one from each branch of the uterus. After such fierce inter-uterine natural selection the young are then left to fend for themselves in the open ocean, often entering estuaries to escape predation.

Behavior: Ragged toothed sharks migrate north from the Eastern Cape to mate in the warmer waters of KwaZulu Natal during the winter months. They congregate in large numbers and are an almost guaranteed attraction for divers at Protea Banks, Aliwal Shoal and at Sodwana Bay’s Quartermile reef. Despite their fearsome looks and size, the ragged toothed shark has never been implicated in any fatal attacks on humans. If threatened or harassed however, they are certainly capable of causing severe injury to swimmers and divers.