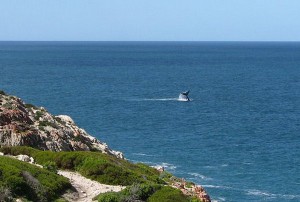 Whale watching in South Africa can be spectacular. Every year without fail, thousands of whales make the migration to their breeding grounds in the temperate and tropical waters of southern Africa.

Southern right whales and humpback whales are the main migratory species and their numbers are increasing with every passing year to create a natural spectacle that can be enjoyed from almost any coastal town along our coastline. 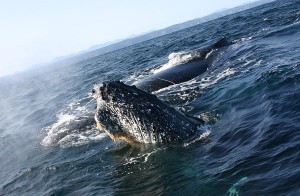 Land-based whale watching in South Africa: The high cliffs of the Western Cape provide an ideal vantage point for the seasonal whale watching of southern right whales and the seaside town of Hermanus holds it’s annual whale festival in September in celebration of all things cetacean.

Although Hermanus is widely regarded as the whale watching capital of South Africa, the more adventurous traveler may want to head further east.  The De Hoop Nature Reserve with its whale trail and nearby St Sebastian Bay actually boast the highest concentrations of southern right whale mother and calf pairs.

Humpback whales are also seasonal visitors to the waters of South Africa. As they pass us on their migration to and from the tropics, they can often be seen breaching and tail slapping offshore in all regions to the east of Cape Town – see whale and dolphin watching tours.

The Wildcoast is perhaps one of the best places for observing humpback whales in South Africa. This annual humpback migration is nothing short of spectacular as literally hundreds of  whales pass by daily. The whales often travel close inshore using the coastal currents and can be easily spotted from the many high cliffs of the Wildcoast. The winter migration of humpback whales also coincides with the annual sardine run, so booking a sardine run tour is one of the best ways to see them. 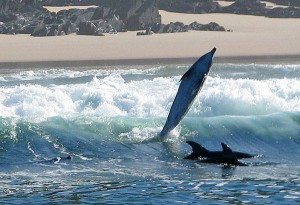 Dolphin tours and charters: Outside of whale season there is still a lot to be seen on any marine tour. Dolphins are found the year round and dolphin watching tours and charters are available in most coastal areas.

Dolphin species to be found in South Africa include bottlenose, humpback, common and dusky dolphins – see whales and dolphins of South Africa.

Oceans Africa is the only South African tour company that specialises in whale and dolphin watching tours and charters, throughout South Africa – from Cape Town to KwaZulu Natal and into Mozambique. Our tour guides and associates are among the best in the local industry and are always on hand to ensure that you experience the best and most informed whale and dolphin encounters possible.

Boat Charters Cape Town PRIVATE BOAT CHARTERS WITH OCEANS AFRICA ZAR 2200 for 2hrs ZAR 2700 for 2.5 hrs Full day and halfday charters on request […]
Do you like it?
Read more

Sardine Run Tours and Charters 2022. Bookings for your 2022 sardine run tour are now open. If you’d like to join us on a sardine run […]
Do you like it?
Read more

Romantic, Boat and B&B Package Private boat charter and B&B package Glencairn / Simonstown, From ZAR 1 900 per person sharing (1 x night) From ZAR […]
Do you like it?
Read more

WHALE WATCHING TOUR CAPE TOWN – HERMANUS – GANSBAAI Whale watching tour Cape Town 3 x Nights from ZAR 12 650 per person sharing. This is a […]
Do you like it?
Read more