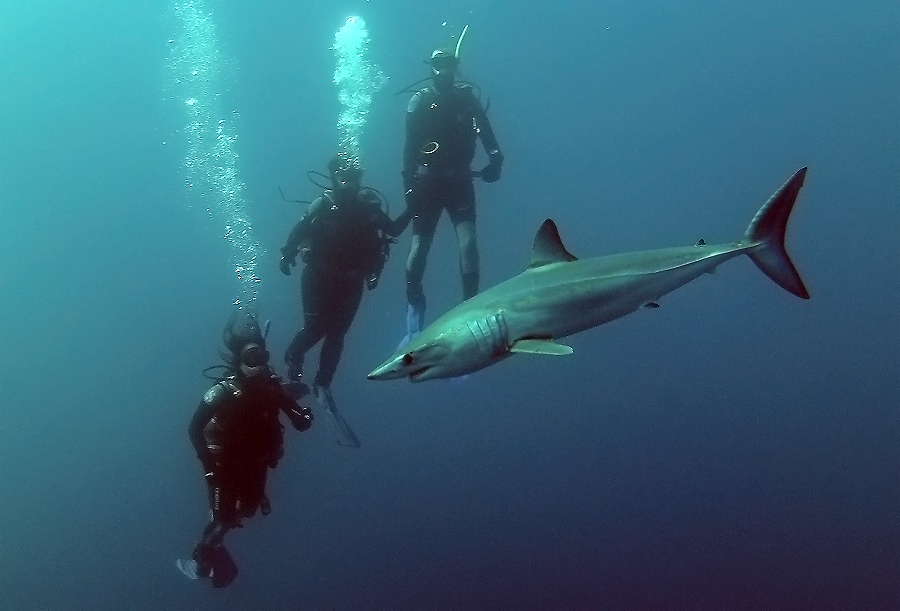 Mako shark identification: The shortfin mako is a sleek, torpedo shaped pelagic shark of the lamnid family. Mako sharks are brilliant blue dorsally and silver -grey ventrally with a lighter belly. The snout of the mako shark is sharply pointed. The fins are prominent with relatively short pectoral fins hence the name shortfin. The mako sharks tail is distinctively ‘sickle’ shaped – the name isurus meaning “the same tail” in reference to its vertical symmetry. Mako sharks may occasionally be mistaken for juvenile great white sharks – the most noticeable differences being a more prominent eye and sleeker body, while the teeth of the mako shark are longer, more slender and do not have serrated edges.

Mako shark biology: Like other lamnid sharks, the shortfin mako shark is endothermic in that it has a heat-exchange circulatory system that allows the shark to be 4–7°C  warmer than the surrounding water. This enables the mako shark to maintain a high level of activity and gives it an advantage over its cold-blooded prey. Mako sharks bear between 4 and 25 live young after 15 to 18 months gestation. 70 to 75 cm at birth, adults may attain almost 4m in length. Female makos become sexually mature at about 2.7m (17-19 years) and may give , while males mature at about 1.8m (7-9 years).

Mako Shark behavior: Widely distributed, shortfin makos are found offshore and coastally in temperate and tropical waters, feeding on game fish and other bony fish, squid, other sharks. Arguably the fastest fish in the sea the mako shark can attain bursts of speed of up to 45 km/h and are often seen performing spectacular leaps from the water – this characteristic behavior is not fully understood. Shortfin mako sharks respond well to bait, relying on smell, hearing, and vision when hunting more than electroreception. Mako sharks will test divers in a baited environment . As with other offshore species like the blue shark, mako sharks are very susceptible to long-lining and their conservation status must be regarded as highly vulnerable.

Diving with Mako Sharks in South Africa: Although mako sharks may be found offshore in most regions of South Africa, dives with mako sharks are primarily run from Cape Town during the summer months from November until May.

We can take you too amazing places you have never been before. Only accessible via boat 🛥 with a trusted skipper with years of Ocean Experience. Join us for a False Bay Personalised ocean experience!! #falsebay #adventures #happiness #OceanExperience #oceanlife #oceanlover #oceansafrica #oceanadventures #FREE #saltylife #oceansmiles #boattrip #capetown #activities ... See MoreSee Less