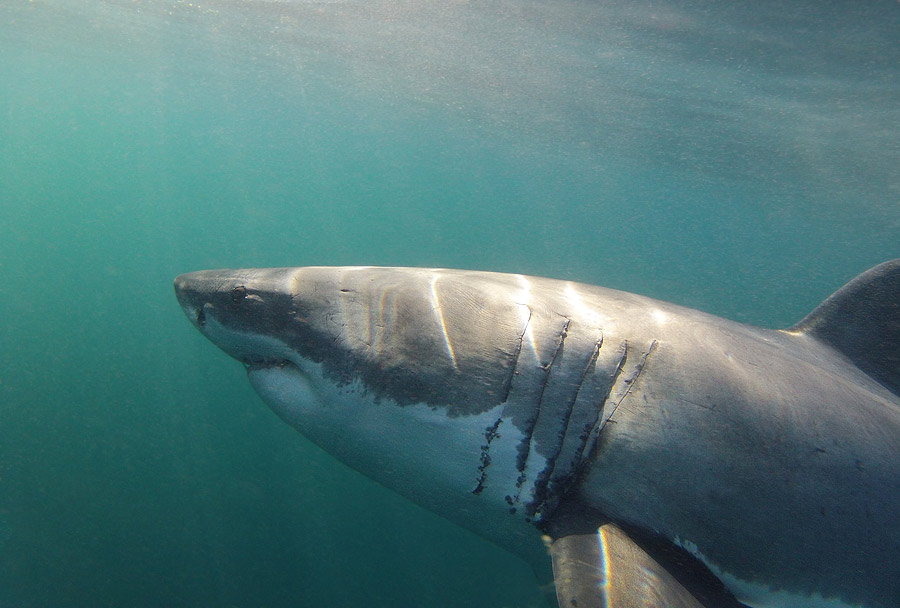 GREAT WHITE SHARK – Carcharodon carcharias.
Great white shark identification: Great white sharks are unmistakable. When you see one you’ll really know it. No other shark has such a powerful submarine presence. Sleek, silent (no jaws soundtrack) and unquestionably in charge, the white sharks only predators are man and orcas. Great white sharks are believed attain 7m in length and weigh over 1800 kg. The body of the white shark is robust and torpedo shaped, generally charcoal black to dark grey-brown on the upper half in distinct contrast to the white underbelly. The pectoral fins are long and large with black tips on the underside. The dorsal fin is prominent and the archetypal shark-fin shape. The caudal fin (tail) is one of the best means of identification, being sickle shaped and almost symmetrical – the only other shark in our waters with a similar tail is the shortfin mako (Isurus oxyrinchus). The toothy smile of the great white holds many large, triangular teeth with pronounced serrations on both upper and lower jaws.
Other names – Blue Pointer and Tommy shark – a grizzly reference to the fate of many British soldiers who went down with the HMS Birkenhead in 1852 near Gansbaai. 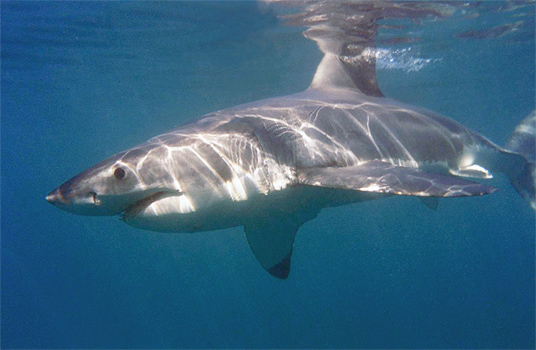 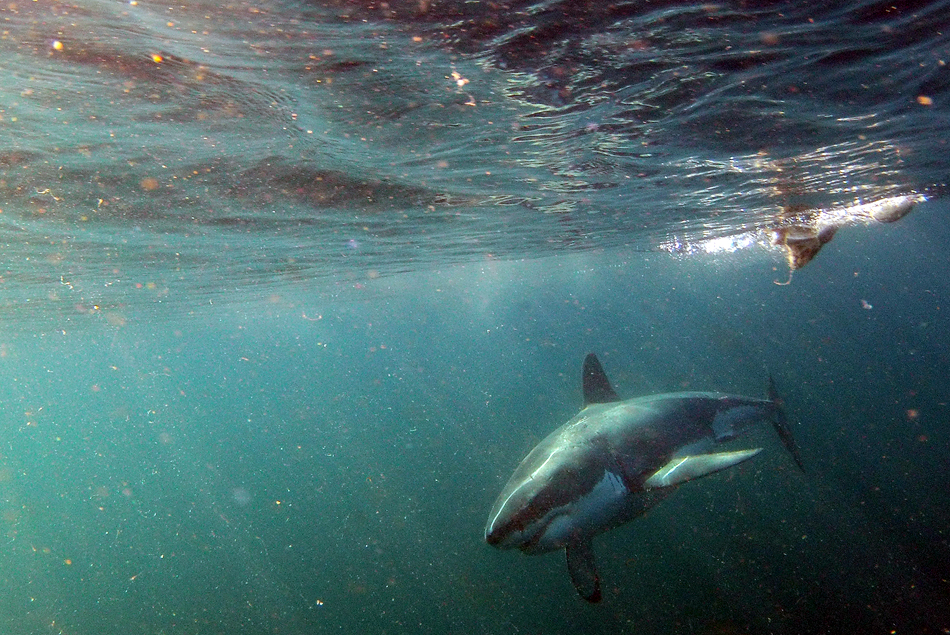 Great white shark behavior: Great white sharks feed on other sharks, seals, bony fish, turtles, large rays and dolphins, they are also known to scavenge on dead whale carcasses. Surprisingly, some research indicates that seals may only comprise 20% of the diet. Great white sharks are without doubt the most globally feared of all shark species, however they may often be wrongly implicated in attacks on humans – especially in warmer waters where Zambezi (bull) and tiger sharks are also possible culprits. Great white sharks can be found in all temperate and tropical waters worldwide. Often sighted close inshore, the larger sharks will seasonally congregate around seal colonies between extensive migrations. In February 2004 a tagged female white shark of 4m, named Nicole, surprised everyone with a transoceanic migration of over 11 000 km from South Africa to W. Australia. Nicole then completed the round trip in just over nine months when she was sighted again off Dyer Island, South Africa, in August 2004. Sightings of great white sharks in open waters off South Africa are rare, however a booming cage diving industry has developed around the seal colonies of Cape Town, Mossel Bay and Gansbaai.