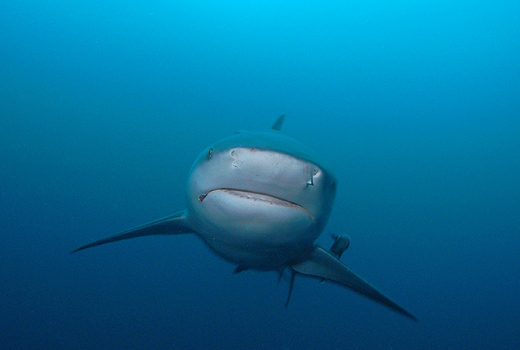 Identification: Bull sharks may reach over 4m in length. The body is predominantly grey with a lighter underbelly and no inter-dorsal ridge. The bull shark is a robust shark with a distinctively rounded “blunt” snout. The teeth of the upper jaw are triangular and serrated, the lower jaw teeth are more slender. The fins are pointed and well developed with no distinct markings. Fin tips may be darker in juveniles – fading with age. Bull sharks are sometimes confused with the comparatively smaller Java shark – Carcharhinus ambionensis

Biology: Bull sharks are remarkable in their ability to tolerate fresh water for long and possibly indefinite periods, having been recorded hundreds of kilometers up rivers in many parts of the world. Bull sharks can be found in temperate and tropical waters worldwide. Up to 12 young are born live in Summer after approximately one year gestation. They reach sexual maturity at about 6 years and a length 2.5m. The bull shark is known to most South Africans as the Zambezi shark, as it has been found many kilometers up the Zambezi River.

Behavior: Aside from their freshwater capabilities Bull sharks are generally confined to coastal waters, estuaries and river mouths. They are opportunistic feeders, feeding on bony fish (50% of diet), turtles, small sharks and dolphins, rays and even crabs. The bull shark has been implicated in many attacks on bathers and surfers worldwide, usually inshore and in murky waters. Often seen on Protea Banks, Kwazulu Natal, they are not regarded as a threat to divers, although they can be very inquisitive and deserve much respect. Recent dives on Protea Banks have seen as many as 12 Zambezi sharks mixing freely with the divers – almost as if the divers are accepted as part of the group. More on baited shark dives…