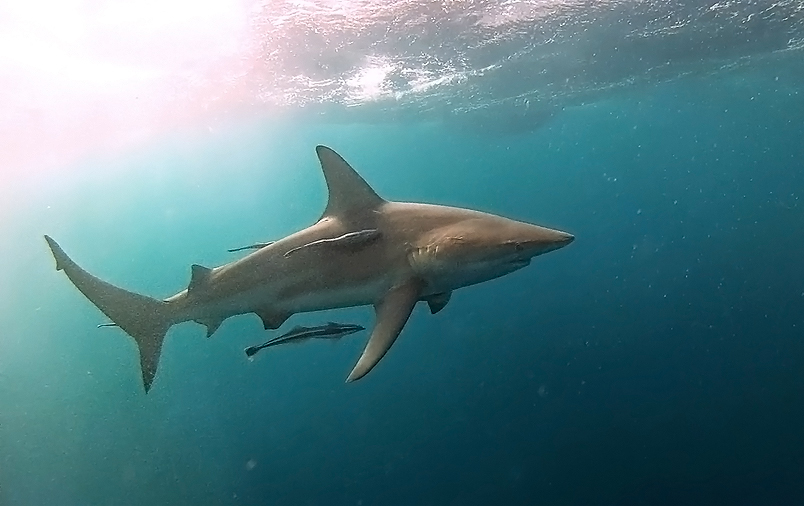 Identification: The blacktip shark (Carcharhinus limbatus) is often referred to as the oceanic blacktip to avoid confusion with the smaller blacktip reef shark (Carcharhinus melanopterus).  Oceanic blacktip sharks are dark brown-bronze in colour with a lighter underbelly and a distinctive light band on the flanks. The body of the blacktip is stout, with a distinctive, high dorsal fin and pointed snout. Fin-tips are usually darker on the pectorals, second dorsal, ventral caudal lobe, and the trailing edge of the first dorsal fin. The anal fin has no black tip unlike that of the spinner shark (Carcharhinus brevipinna) with which it is often misidentified. The teeth are narrow and cusped on the upper jaw. Blacktip sharks do not have an inter-dorsal ridge.  They can attain 2.6m in length.

Behavior: Oceanic backtip sharks can be found in the East coast estuaries of Kosi Bay and open ocean up as far as the tropics. Preferring to feed on large pelagic bony fish they are very active, fast swimmers, considered a pest by fishermen as they will readily steal fish off the line. They will also feed on smaller sharks, rays, cuttlefish, lobster and bottom fish. They seem to respond well to sound and divers may maintain shark interest with repetitive clicking sounds. As one of the sharks associated with the sardine run they are easily attracted with fish chum and are often a highlight of baited dives in KwaZulu Natal.