Cage diving South Africa: Cape Town, Gansbaai and Mossel Bay are the main centers for shark cage diving in South Africa. Diving with great white sharks is of course the main attraction. The cages are securely attached to the boat and extend no more than two meters below the surface so a diving qualification is not required. There are also great opportunities for surface viewing should you prefer not to get your toes wet. 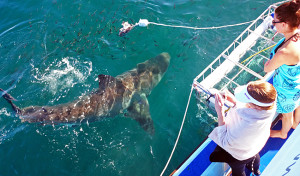 Cage diving in Gansbaai: The cage diving in Gansbaai is mostly focused around Dyer Island, approx 8km NE of Danger Point where the troopship HMS Birkenhead (1852) marks the watery grave of many an English soldier. Great white sharks are attracted to the islands seal colony and are often found cruising the nearby channel, known as Shark Alley. Gansbaai is widely regarded as the shark cage diving capital of South Africa with eight licensed dive operators offering shark viewing charters throughout the year Although the summer months from September to April are considered the low season for viewing great white sharks, Gansbaai still boasts a very high success rate of shark sightings at that time. 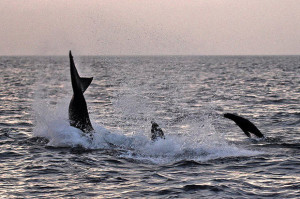 Cage Diving in Cape town: Cape Town has its own seal island in False Bay, some 8km from Simonstown. Seal Island is famous for its breaching white sharks, as the seals are frequently ambushed from below with such force that the sharks may be seen leaving the water entirely in a spectacular explosion of predator, prey and spray.

During peak season the morning shark viewing charters leave from Simonstown at 7 am to be at Seal Island before sunrise. The first hour of the trip is spent observing the sharks’ natural hunting behavior in the hope of witnessing a breach or a predation event. The peak season for natural predations  is from June to August in False Bay with as many as 30 predation events recorded in a single morning, although activity varies on a daily basis and is dependent on seal movements. There is a closed season period for shark cage diving  in False Bay from around October to February as fewer shark numbers at the island and strong SE winds make the cage diving charters unfeasible.

Cage diving in Mossel Bay: Mossel Bay is also a hot spot for great white sharks. The small island off Diaz Beach  hosts a large breeding colony of Cape fur seals. The island is tucked well inside the bay and lies less than 1km offshore. It is therefore well sheltered from the prevailing westerly winds in winter and provides a great cage diving option for those travelling the coast along the Garden Route. As with the cage diving in Gansbaai ,  the shark cage diving in Mossel Bay is seasonal, peaking during the winter months until September, but still offering charters throughout the year.

In general Cape Town, Mosselbaai and Gansbaai are best dived in the winter months from March to September when conditions are most favorable and sightings are more frequent. View our dive tour pages for packages that include Cage Diving or allow us to create a custom tour for you with transfers and accommodation to suit your individual requirements. 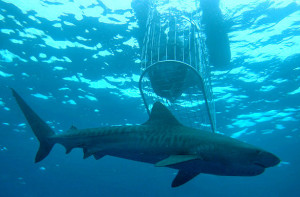 Cage diving in KwaZulu Natal: For non-divers there is now an exciting new cage dive option available. If you’re unable to make it to Cape Town or you’d like to see different sharks these cage dives in KwaZulu Natal  offer regular sightings of tiger shark, Zambezi (bull) and blacktip (C. limbatus) sharks.

Cage diving with great white sharks is now a major diving attraction for South Africa and the shark diving industry plays a vital role in shark conservation and public education. With operators adhering to strict guidelines, we believe that responsible diving with great white sharks (protected in South Africa since 1991), will help to dispel misconceptions and encourage a better understanding and of these most magnificent predators.

“Despite my initial reservations about baited shark dives and the possible negative impacts of shark baiting, I have now become convinced that increasing public awareness through shark tourism is perhaps the only hope these animals have of achieving any form of protective status” Graeme Grant, Oceans Africa